View of Montfort from Bears Hill captured by PR Russell.

The SENGALTHUPADI PRECIPICE on the northernmost hills of the Shevaroys.

up to the village temple. The Sengalthupadi Precipice is a two km trek from

It is not for the faint-hearted and one needs stamina, strength and strong shoes

to make it to the cliff and return. You park at the Temple and than walk through

some tribal coffee plantations, than a narrow bridal path used by cattle,

before you hit the scrub jungle and really tough terrain. Very sloping and undulating

and a fall thousands of feet down the cliff on your left. It is about a km to the precipice

through rough trekking terrain. This is the kind of terrain in which IBEX thrived in

till they were shot out on the Shevaroys.

View at the Beginning of the Trek-Akroor Village in the valley below.

Road to Bommidi or Malappuram as it was known in the old days-One of the original bridal paths to Yercaud.

But what you will ultimately see is mind boggling, and worth all the effort.

First you have to go through several outcrops of rock, from which one can have panaromic views

You than reach Chavadi Parai, a rock cave large enough to shelter a family of ten or twelve.

You than crouch through and traverse under the rock and reach the other side.

that far to catch the view and take a break. You than reach the actual precipice a sheer rock face,

slam bam three thousand feet feet into the valley. We enter this magical cliff at about the

three fourths level through the Sentinel Rocks, which acts as a gateway to this view point.

Chavadi Parai- Large enough to shelter a family of ten or twelve persons.

and the valley lies far below. After you are through the narrow gate way,

what you see will simply blow your mind away. Its like what Alibaba saw when the caves

opened to him and revealed its treasures. Here the narrow rocks have to be traversed

a small ledge about six to eight feet wide, on which one rests and views the most awesome view,

the actual cliff face, with the rocks so strategically and majestically overlooking Achampatti

and the Bommidi Plains. At times visible I am told from Bommidi Railway Station.

little platform you have entered. It’s like being suspended like a spider, or a bat with much

below you and the rocks above, or like being on a bubble lift suspended on the cliffs face,

with the sheer rock above and below you. On your right is the Sengalthupadi Precipice

in its entire splendor!!! It will simply hold you spell bound, the vantage view is mind boggling,

the air crisp and clean,the rocks above and the valley below and a few eagles drifting in the air.

The Viewing Platform-Two Thousand feet above the valley below.

Sengalthupadi Precipice-Tribals harvest honey from the hives on these rocks.

Another View of the Cliffs.

Yercauds Pagoda Point and Ladys Seat are poor competitors for the grandeur of what you see.

These photographs really do not do justice to what is truly a spectacle.

So next time you are in Yercaud, do not miss this must see Spectacle. Truly Extraordinary!!!.
Mohan Rajes

Other sites around Yercaud 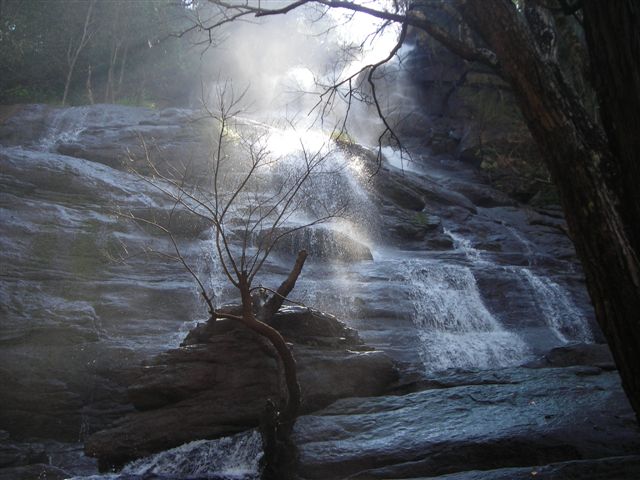 Cricket on the grounds of Montfort.